The Lotto Black Book has now been around a very long time and the formula is not a winning formula. I cannot believe this Lotto Black Book system is still being advertised as a winning lottery formula, created by a Math professor who states took 9 years to develop and was even shot in the foot by thieves trying to steal the system. The Lotto Black Book formula is a huge scheme, it is Not A Winning Lottery Formula and I will reveal to you the honest truth about this shady system.

Over the years many people have tried and tested the Lotto Black Book and the verdict is, No one is actually winning any lottery games using the secret formula, as the Lotto Black Book secret formula is complete Nonsense! If you really think a Math Professor named Larry B or Larry Blair created this system and won 3 lottery jackpots using his own system, yet does not show you any solid proof of any lottery jackpot winnings that can be verified, you are the exact person the seller is trying to fool to grab your money and you can forget about a guaranteed refund, not going to happen. Have you ever wondered why there are so many good reviews and YouTube videos on this silly shady system? It is because the system is sold through Click Bank and has thousands of affiliates selling the system for commission, which is why all the so-called good reviews are pure lies!

Here are the pros and Cons of the Lotto Black Book Formula below:

Real reputable winning lottery systems Will not be sold through places as Click Bank, they do not need affiliates selling the system to make money, the system already made them money. We have seen real verified winning lottery tickets from a few solid winning systems such as The Lotto Guy Lottery System which by the way is the best tested and proven winning system in the world! Other great winning systems you might want to use are the Gold Pyramid System and Smart Play Lotto Wheels. These are real systems and you will not find them sold through any place that affiliates can sell them.

All the top lottery review sites report the Lotto Black Book as a fraudulent system you should avoid. You need to use real winning systems, if you want real success at winning the lottery PERIOD! Remember if the system sounds way to good to be true as the Lotto Black Book System claims, 9 out of 10 times it will be a fake system. 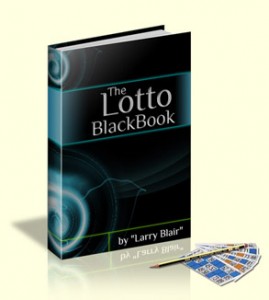 More lottery sites that can help you win the lottery.

After Investigating the Lotto Black Book lottery system we find many problems. There is NO Larry Blair math professor, he did not get shot for his secret lottery system, Larry Blair did NOT win the big lottery 3 times in a row, He never won any lottery game. This is a phony marketing gimmick designed to lure people into buying the useless made-up system. The lotto Black Book is not a tested and proven lottery system, it really is a very confusing pile of nonsense. The system is very costly and does not deliver what it advertises, nor does it honor guaranteed refunds, so do not be fooled!

It is a very hyped up e-book filled with complete nonsense. The system is virtually useless and there are no real legit winners using the system, only good reviews are by affiliates selling or promoting the system for commission.  The whole system is a total fraud!

Read this article, this person totally breaks down the first sales page (there are two) of Lotto Black Book system and shows you what a lie the lotto black book really is see HERE. The second sales page has a few less lies, but still same silly system. You can check this reputable Lottery Systems Review Group to see lottery systems that are recommended or not recommended to use. The best number 1 lottery tips I can relay to you is, if you don’t use  good sound lottery tactics, you really are just wasting your time and money.

More articles you may want to read:

Exposing the Lotto Black Book Lottery System for what it really is a high priced useless lottery system. The Lotto Black Book is using a totally fake scenario and sold by shady marketers through ClickBank, you do not want to waste your money on this garbage!

We’ve all seen them, the ‘too good to be true’ advertisements on the Internet. You know the ones where you’re promised a fortune will little to no effort or the ones where you can sit at home and rake in millions. You get the idea. So this leads me to what is becoming the biggest internet sensation among those looking to win the lottery…and it’s all a crock of B.S.

The Lotto BlackBook is one of these silly to good to be true systems also called lottery black book formula. Open up the original salespage and read the first line, it says “Oklahoma Professor gets SHOT in the foot after winning the big lotto prize 3 times in a row”. Larry Blair is the supposed math professor who took 27 years to develop the secret Lotto Black Book system. Now here is the real truth! Larry Blair is just a made up person and did not win ANY big lottery three times in a row. No matter which state, province or rock you live under, there are rules when claiming a large lottery game prize. You must sign to allow permission for the lottery corporation to publish your real full name. The all-powerful Google would yield such winning results in approximately 0.15 seconds, except it doesn’t, because Larry Blair didn’t win anything, it’s all false advertising, using hype and phony testimonials to sell a useless product.

Scroll down the sales page for the Lotto BlackBook and you will see a mug shot drawing of the suspect in the mysterious foot shooting.  This is a clever reverse image search, again thanks to Google, returns a mug shot for a man who is wanted for Armed Robbery in Tennessee at various cheque cashing facilities and has nothing to do with Larry Blair or the Lotto BlackBook at all.

Now lets review the amazing life story of math professor and genius, Larry Blair. The system and website are sold and owned by a marketer and a company which I will not name – A company that employs no such person named Larry Blair. But lets still explore this fictional character. He says through years and years of mathematical scribblings and studious efforts in the library, he developed the winning formula which gives lottery players a 48.7% chance to win every time they play over and over again. The salespage also shows a picture of his work desk. This image actually belongs to a nerd forum, it is a competition for the messiest desk in 1999. It is not Larry Blairs desk he works at. Again all total lies.

The first picture of him holding up the giant winning check is for $200,000 but the face and name are blanked out. Do a background check on this and you’ll see the actual original image is of Michael Anderson..not Larry Blair. The next image is for 1 million dollars, but isn’t even the same person another untruth. The people behind this system are very lazy at their deceitful approach and the lack of effort clearly shows. Also guaranteed refunds are not honored, this is another lie.

The rest of the Lotto Black book sales pitch consists of testimonials, all of which by the way are fake. Fake testimonials aren’t the biggest threat though. Almost 10,000 affiliates help sell this system to earn commission. This means they lie to you in even more creative ways to get a share of the money. This has resulted in thousands of new salespages and clickbank ads hitting the web trying to fool you. This kind of attention is the exact opposite of what we need to find a legit system that really works. A company/lottery system that goes to such extent to fool, trick and deceive you doesn’t belong on the internet at all. Exposing the real truth behind Lotto Black Book is what is necessary for the FTC to notice and squash the whole operation down. FTC astroturfing guidelines are repeatedly broken as fake reviews are being written every day by the owners and affiliates. Now you know the truth, pass it on to others so they do not get taken in and loose their money and be careful as the lotto blackbook has different sales pages..

There are only a few and I do mean only a few real legit reputable lottery systems that have made people lottery winners. The serious lottery players use them and are highly recommended for all pick 5 and pick 6 lottery games. Here are the two best systems:

Both of these systems are real, they are not sold by marketers, they have no affiliates selling them. They are both verified tested and proven and are your best plan of action to win the lotto.